The new 74-metre superyacht Cloud 9 was launched on schedule – and in spectacular style – by CRN on 21 January. Cloud 9 is expected to be ready for delivery in April this year after completing her fitting out and sea trails .

With engineering by CRN’s in-house team and exterior design by Zuccon International, hull #131 was originally commissioned by a Turkish client, who sadly passed away after construction had started. Burgess brokered the resale to an experienced Australian owner and Andrew Winch Design was brought in to develop the interior styling. Andrew Winch also designed the owner’s previous yacht, a 60m of the same name built by CMN and sold by Burgess in 2015. 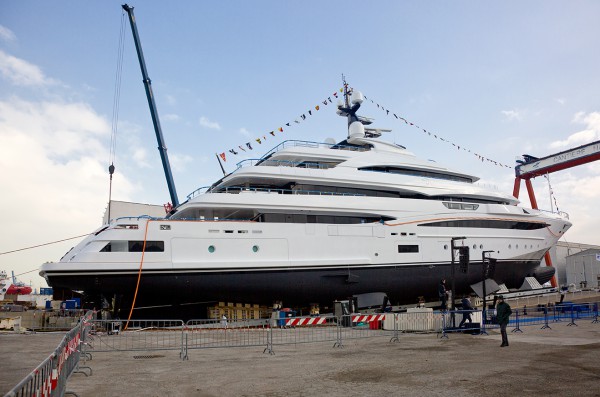 Exterior designers Zuccon International Project and Winch Design collaborated on the design of Cloud 9, who designed the exterior guest areas and interior of the yacht. “It has been a great pleasure to work with Zuccon,” commented Andrew Winch of Winch Design. “I have always admired Mr Zuccon’s exterior designs and to partner with him and CRN for this project has been very exciting.”

With five decks and a beam of 13.5m, Cloud 9 comfortably accommodates up to 16 guests (12 when chartering) in a master suite, VIP suite and six guest cabins, in addition to 22 crew members in 13 cabins, plus berths for four staff in two cabins.

CRN is currently working on another three vessels that are under construction in Ancona: the 79-metre CRN 135, 50-metre CRN Superconero, and the 62-metre CRN 137