Today Split is is one of the most important ‘’old-timers’’ cities with its rich history and cultural heritage that has exceptional coastline and islands. The city lives at a slow pace so when you find yourself at it’s squares and in it’s restaurants and cafes croweded with people every day will feel like a holiday. Also, Split is one of the best sailing destinations with more marinas, bays, anchorages and beaches. Marina Lav, ACI Marina Split and Marina Kaštela are some of the marinas which located in the Split area.

If you come in Split with your motor or sailing yacht you should visit: Diocletian Palace

Diocletian Palace and the historical core of the city are under UNESCO protection. In 1979. they were listed in the register of World Culture Heritage. Roman emperor’s palace originally had a residential character as a luxurious villa and at the same time it was fortified castle. It was build in record time, between 293 and 305. Diocletian Palace contibuted a lot to the development of this city that later spread on it’s walls. Today it is one of the most significant lete antique architecture not only because of it’s preservation but also known for it’s original construction solutions and forms.

Peristyle has allways been the heart of the Palace and the city since it’s by far most important and historiclly rather old imperial square. Some things were demolished, some altered, some holes were made; things were patched and built as such strained circumstances allowed. But, no matter time and centuries that has past it is still unique antique place where you can stamble upon an unusual coexistance of sphinxes, sarcophagi, early Christian crosses, medieval tombs, roman temples...etc.

The Split cathedral itself is the oldest building housing a Catholic cathedral in the world, as one part of it emerged from the Mausoleum built by the Emperor Diocletian. Today his last resting place is one of the smallest cathedrals in the world. It is consecrated to the St. Domnius - first Salona bishop who later became the patron saint of the City of Split. Diocletian had killed him to prevent the spreading of Christianity throughout his empire during the last Roman persecution of the Christians in 304. AD. together with other Salonitan martyrs. Isn’t this an irony?

The Mrduja regatta is an annual regatta held in the city of Split, named after the islet of Mrduja in the Split Gates strait. It is contested over a course of 22 nautical. The regatta's first edition took place in October 1927. It was not held during World War II, between 1941 and 1945. In the regatta's 84th edition this year, 185 sailboats took part in the race. 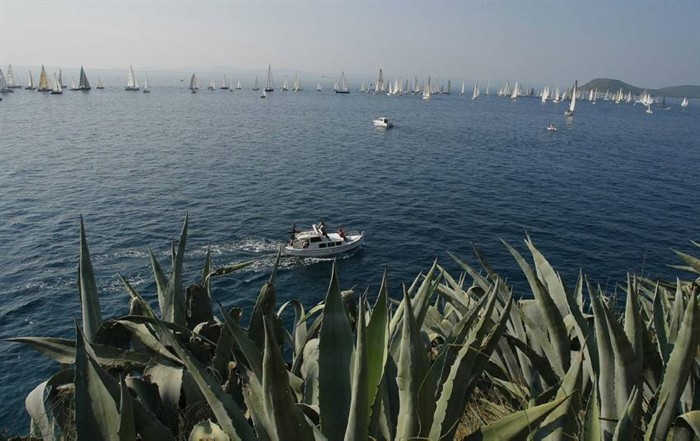 This is the legendary beach where the story about Picigin - unique sport game which is slowly becoming a tourist brand began.

Most important green surface of the entire area from where you can have the magnificent panoramic view of all the city is Marjan. On its slopes in the early spring blossoms the plant of yellowish flower that local people call Brnistra but the Greeks called it Aspalthos when they named this town.

Napoleon’s France came into possession of Dalmatia after short Austrian administration by their peace-treaty in 1805. At that time Auguste Fréderic Louis de Marmont was appointed for the military commander in Split. This general governor of all Illyrian provinces indebted the city when he undrtook many renovations during his short rule.

Built in neo-Renaissance forms this large square was named after famous Venetian original. Complex was built in 1844. on the ground where in Marmont’s time was a large green public park.

On a good weather, no person in Split will miss walking down to the fish market not only just to buy something but also to see what is there and to hear all the news and local gossips from talkative fishmongers. This colorful place is in the center next to the town’s Thermal sulphurous baths and that is why there are no flies or other flying intruders on Fish-market.

Split is town of live Dalmatian spirit that combines tradition and urban life. It’s sociable citizens particulary durring summer rarely stay at home, they seek fun and company so this lively town offers something to everyone. For those who want to spend incredible sailing holidays can do that in numerous bars, bistros and restaurants that offer that kind of fun. If you are interested in cultural happenings not to be missed nowadays are the evenings of the "Split Summers", theatre events.