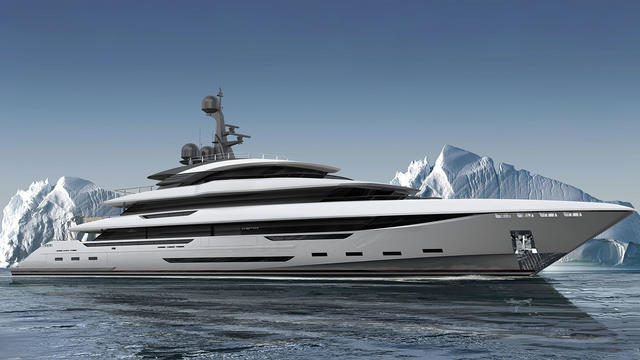 King Shark brings the yachting lifestyle to the furthest reaches of the world. The yacht will be built at Rossinavi’s Viareggio facility with naval architecture being supplied by Arrabito Naval Architects.

When asked about the project, Rossinavi COO Federico Rossi commented: “after the Vector project with a length of 63-metres, we are very satisfied to be chosen again for this mega yacht construction and especially in this ice classification.”

This master of the water is not only a spacious yacht with a beam of 12.70m and 1560GT, but extremely comfortable at ranges of over 6,000nm.
It has accommodation for 12 guests split across six cabins along with a crew capacity of 17.

King Shark is the next stage of evolution from Rossinavi's 49-metre Prince Shark superyacht range, and is now due for construction in Viareggio, Italy to Rina and Lloyds registration.

With a gross tonnage of 1560 King Shark will have a top speed of 17 knots and range of more than 6,000nm when cruising at 15 knots.
Rossinavi are continuing their legacy and furthering their evolution with one of the finest explorer projects under construction to date that include the 48 metre explorer yacht Argo and in-build P63 metre Project Vector.