Intricately restored at a Swan specialist in northern Finland, the Swan 43 Runn has found a new home with Charles Hill, his wife and four children. Pip Hare describes the sensitive refit of a 1960s classic 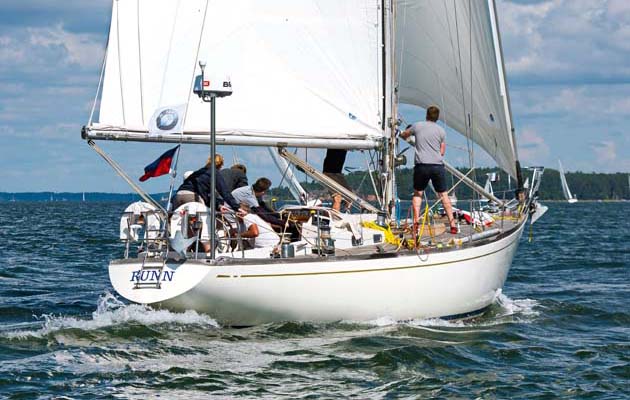 When a Contessa 32 became a little bit too snug for a holiday with his wife and four children, Charles Hill went in search of a bigger boat for adventurous family cruising. Two years later, Runn, a 1969-built S&S Swan 43, has emerged from a painstaking refit.The Swan 43 was only the second Olin Stephens design to be produced at the Nautor’s Swan yard, but its overhanging ends, short coachroof, low freeboard, sheer and tumblehome established the classic Swan lines.

Runn, hull number 004, was commissioned for Finnish racing legend Michael Berner (a skipper in the 1985-6 Whitbread Round the World Yacht Race) to campaign in the 1969 Admiral’s Cup and subsequent transatlantic race.A Swan 43 seems an unusual choice for family cruising – accommodation is limited by modern standards. But it ticked all boxes for Charles. A fan of the seakeeping qualities of older designs, he sought a yacht which could be cruised double-handed with his wife and could host comfortable family holidays away from marinas, but which could also be raced competitively in class from time to time.“It all depends how you measure comfort,” Hill explains.
“This boat was built to be comfortable at sea, the berths are the right size and in the right place, and you can walk from cockpit to forepeak being able to hold on all of the way.” 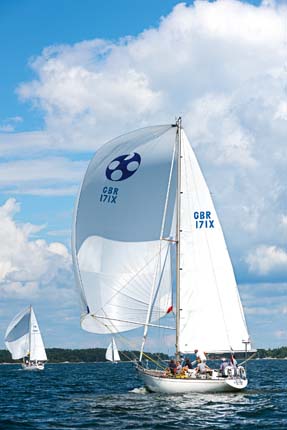 Runn was found in Helsinki, poorly maintained and suffering from a lack of use. Consultation with Lars Ström, manager at Nautor’s Swan design office for over 30 years, and Svenkki Kronqvist, manager of the Yxpila yard in Finland, Swan refit experts, revealed her origin and robust build quality.In September 2014 Runn was transported to the Yxpila yard at 63°N to begin a mammoth refit. Hill managed the project, Ström and Kronqvist provided expert advice. Hill admits this was his first boat restoration project, but he was hands on – as well as overseeing the project from Suffolk, he spent one week in five working on site alongside the Finns – and drew on his experience of restoring classic cars.

He says: “With classic cars it is all about the detail – when the original build quality is good then you need to maintain that quality throughout, even on those details that no one will ever see.” This ethos shines throughout the boat; the quality is high even behind the lockers and under the floorboards.Runn’s hull was structurally sound and free from osmosis. The teak decks and engine had been replaced four years earlier, so structural work was limited to a rebuild of the aft bulkhead – doors were added to create a more private aft cabin, the only adjustment Hill made to the interior layout – and a modification of the bow to take a custom-made double bow roller with a windlass and anchor chain box. This sits in a watertight crash section forward. Any older, rotten cross members were replaced with new aluminium box sections.