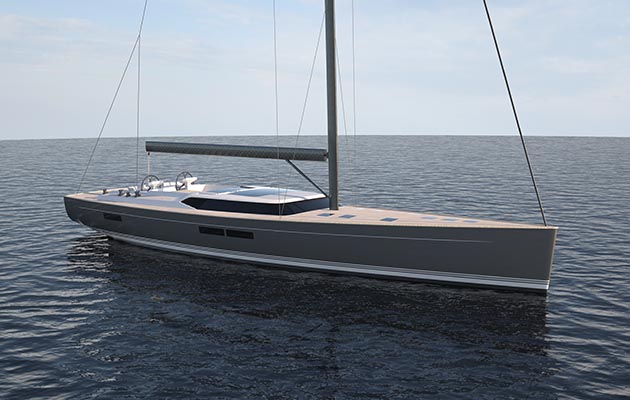 Contest Yachts of Holland has announced that construction tooling for its new 26m flagship Contest 84CS has now begun.Scheduled for launch in 2018, this is the Dutch shipyard’s first step into the 24m-plus sector.

The new flagship model is made in design partnership with German naval architects Judel/Vrolijk & Co.Interior design is modern-classic by Wetzels Brown Partners of Amsterdam who’ve been on board with Contest Yachts since the launch of the Contest 72CS in 2012.

The shipyard says the new model will provide for distance cruising and regatta participation.The yacht has been designed for social sailing for up to 10 guests in a customizable accommodation plan and supported by a crew of four.Unusually at this size, the Contest 84CS owner can specify either aft or forward master suite, with service quarters also changing ends.

The hull form of the Contest 84CS features a moderate-shallow underbody running back from lightly raked bow — with integral bowsprit and optional furler for asymmetrics — to a soft chined, broad stern with twin rudders.The composite construction is according to Contest Yachts’ standard infusing techniques and under Lloyds’ plan approval.This includes a sandwich laminate throughout, from sheerline to keel stub, with a single shot infusion for each of hull, grid and then deck.

Construction of the Contest 84CS also considers the latest technology for sound insulation to the engine room. There is also a service access to all systems and equipment and a dedicated technical room.A large lazarette will house compressor and toys while a sizeable RIB can be stowed kept low in the foredeck tender well.