In the 47 years since the first non-stop round the world race, the Golden Globe, races circling the globe have become so numerous the venture seems almost commonplace.So today’s announcement by Australian solo sailor and adventurer Don McIntyre that he is to launch the Golden Globe 2018 to run on the 50th anniversary of the original race, is both novel and exciting. McIntytre is going entirely against the grain and the design impetus for ever more sophisticated yachts to create what he calls a “totally retro” race that will be restricted to slower, smaller, lower budget traditional designs and using only the technology of the 1960s.His race is inspired by the human stories – and catastrophe – that made the 1968 race such a legendmaker and fired public imagination far beyond the world of sailing. 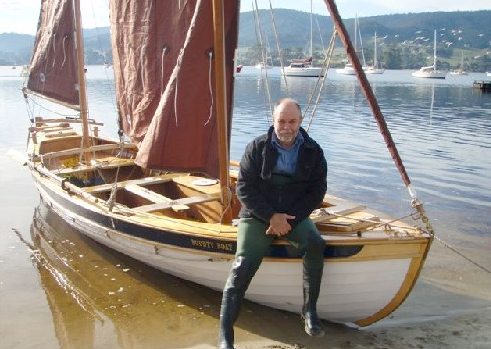 This was a race of utmost human endurance won by a young Robin Knox-Johnston (pictured above, in his self-built Suhaili), a race that liberated Bernard Moitessier and tragically unhinged Donald Crowhurst.The race will depart, as did the original, from Falmouth and will begin on 14 June 2018. There will be a prize of £75,000 for the first yacht to finish before 22 April 2019. It is open to a very narrow spectrum of yachts: they must be series production glassfibre boats of 32-36ft to designs drawn before 1988, have a minimum displacement of 6,200kg and a long keel and rudder hung from the trailing edge of the keel.These can be new builds, but only to original designs, with no modification to interior, mast height or boom length, or any light weight fittings or components.In other words, the race is open only to yachts that by today’s standards are slow, heavy and modestly canvassed or, as McIntyre puts it “wholesome oceangoing vessels.”McIntyre (pictured below) knows what he’s talking about. He has been a leading figure in Australian solo racing since taking part in the BOC Challenge round the world race in 1990, and has cruised extensively and led Antarctic expeditions. He also advised teenage Australian circumnavigators Jesse Martin and Jessica Watson on their successful round the world records.
McIntyre is exactly the type of adventurer he believes the Golden Globe 2018 will attract and indeed is its first entry.He will be racing a Tradewind 35, one of the many older seakindly production designs around the world that fit the bill (not the gaff ketch day boat you see above!). Other designs that could take part include the Rustler 36, Rival 32 and Rival 34, Vancouver 34 and cat-rigged ketch Freedom 35, to name but a few.McIntytre makes the point that such boats are still plentiful and don’t require huge budgets. “My entire budget for the race is about £70,000. This race is multi-dimensional. It will mean different things to different people and it will appeal to a whole new group of people,” he comments.

Recreating an era of uncertainty

Today, it is hard to imagine the daily challenges of the race in 1968, but it is a large part of what Don McIntyre means to recreate. No instant position fix with GPS, downloadable weather or collision avoidance with radar or AIS. It will be back to the era of sextants and crackly HF radio, and all the uncertainty and patience that went hand-in-hand with that.The rules rigorously exclude modern electronics. No electronic autopilots are allowed, no wind instruments, no modern logs or laptops. And no, skippers won’t be allowed to take an iPod or a digital camera, or a video camera. It will be back to Walker trailing logs, Super 8 videos and cassette tapes of the Moody Blues.But modern safety equipment will be allowed and emergency GPS and other devices can be taken in a sealed box. If they have to be used, or a skipper has to stop to make repairs, they can carry on in the race but retire to a ‘Chichester division’, named after Sir Francis Chichester, who stopped in Sydney on the first solo circumnavigation south of the five Great Capes in 1967.The yachts will all have satellite trackers, though, so that the organisers – and we – will be able to see where they are, and skippers have to contact race control at least once a week. They will also have a satellite phone that the race organisers, and only they, can phone in. If skippers want to contact home, or get weather forecasts, they will have to use HF radio.It will not be a fast race. Back in 1968, Knox-Johnston took 312 days to sail round the world in his 32ft Suhaili. The winner of the 2018 should be quicker, but not vastly: a 35-footer averaging 5 knots could reach Falmouth again in 280-290 days.That compares to the current outright solo round the world record of 57 days, still held by Francis Joyon in the 105ft trimaran IDEC, average speed 21.6 knots!But Don McIntyre stresses that the appeal, and the challenge, is the return to a properly solitary existence. “The experience for the skipper will be intense and raw,” he says. “They really will be out on their own – no blogs, or Twitter to distract them.”“It’s as big a personal challenge as any of the big races,” he says. “And you don’t have to be a sailing guru. You don’t have to have a million. You just have to have the dream.”After McIntyre, the next confirmed entry is from Liverpool-based adventurer Chris Jacks, whom McIntyre describes as “an adventurer who can sail rather than a sailor wanting adventure”. But he adds there is also early interest from four yachtsmen who have already sailed round the world.I think I understand why. This race will be long, but physically manageable for a greater variety of people. Part of me rather fancies a crack at it myself. Or at least I do in theory.The trouble is, if I were to go looking for backing to take myself away for nearly a year, I might get quite a few offers…