The finishing times would have been acceptable for an inshore race but were made all the more impressive given the 5,250 nautical mile leg. A leg in which there had been multiple lead changes with boats going from hero to zero and back again.Fernandez was quick to acknowledge how tricky the conditions had been and how late they had snatched the lead.“We were struggling with Abu Dhabi and Dongfeng at the beginning, we were a bit slower, and in the Doldrums too,” he said. “This morning [day before the finish] we saw them very close and managed to pass them. Since then we led the whole way!”Launching themselves onto the podium for this leg has provided a welcome change to the team’s fortunes so far, but they were also quick to clarify that one leg win didn’t mark a step change in their performance from now on.“There are still big speed differences across the fleet,” said crew member Rob Greenhalgh who joined the campaign on Leg 2. “Dongfeng has speed to burn on just about every angle, at least that’s how it looks at times. We feel that we’re still very much on the back foot as there are big areas of our polars that we don’t have much data for. You need accurate polars for this race and ours aren’t there yet.“Because we didn’t have the time to train as much as some of the others we are still learning the boat. So in our current state we think we have an eight mile a day deficit over the faster teams.”
A view that could help to explain some of the more unusual tactical moves that the team made during the course of the leg. Knowing you’re slower often means making more radical moves to catch up.But by the time the fleet arrived at the finish it was clear that the differences were even smaller than before.“We were further behind the lead boat in the in port loop of the leg out of China than we were at the finish of this 20 day leg,” said Abu Dhabi skipper Ian Walker.While his team were a sniff away from winning the leg, their main task was to make sure they stayed ahead of their closest rival on the overall points, Dongfeng Racing, a task they achieved. Beating Mapfre was less of an issue points wise, at least at this stage. Yet Walker was clear as to how much tighter this race is becoming than originally expected.“Although I said before the start in Alicante that being on the podium was the key to success, just doing this alone may not be sufficient,” he admitted. “This was a challenging leg tactically with lots of chopping and changing but we were always in the hunt which I’m pleased about. If the leg had stopped at any point we were always going to be in the top three.” 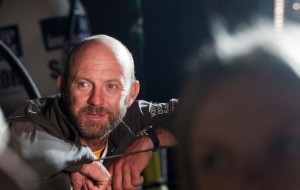 Staying in the hunt hadn’t been easy though in conditions that were so heavily influenced by clouds and squalls.“Our radar was broken for the whole trip so we couldn’t use it to read the clouds,” continued Walker.Others had problems with their sat comms leaving them short of satellite pic data and weather analysis.“Our sat comm dish was out of action for five days,” said Mapfre’s Greenhalgh. “As it turned out the dish had got stuck at the end of its range and wouldn’t move. When we freed it was fine, but we didn’t have any weather data for five days.Aboard team Alvimedica the radar had worked as it should but as navigator Will Oxley explained the system still has it limitations. 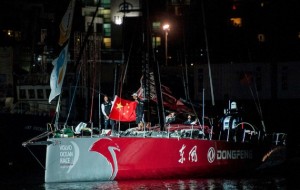 “On the last race we had a 4kW radar but this time we all have a broadband radar. This system does have benefits especially when ity comes to power consumption but it doesn’t punch into the cloud as effectively which makes it less useful when you’re assessing how big a feature the cloud ahead is. The bottom line is that most of the assessment was made visually.”Gear breakages were another feature of this leg although not in the kind of numbers and severity that has caused the race problems in the past. Among those experiencing problems Dongfeng Racing’s list of issues seemed long compared to others. With issues on several other legs, some have been questioning whether the additional speed that this team seems to have had anything to do with the gear breakages.Skipper Charles Caudrelier was quick to counter this.“I don’t believe we’re breaking more than any of the other teams,” he said. “We are just open about what happens. We have had problems with our mast track and our J1 halyard lock which broke, but I know several other teams have also had problems here. We could have been more efficient at dealing with the problem though.”