Having to stitch up your crewmate’s head wound whilst slamming over rough seas in the Southern Ocean is a nightmare situation that even the most experienced of medics would find challenging.
Yet co-skipper of the Spirit of Hungary Conrad Coleman found himself in that very position during the latest leg of the Barcelona World Race, when fellow crew member Nandor Fa suffered an injury whilst trying to fix an issue with the rig.
He wrote all about the incident in his latest blog entry, whilst on passage between Tasmania and the South Island of New Zealand.  It makes for a grim read…
“Been in the wars a bit have you, mate?” My Mum would say, dabbing ointment onto a newly grazed knee or scuffed elbow. Well, we’ve been in the wars a bit lately too, only we needed a little bit more than ointment to patch us up.
Monday 23rd February: 0600hrs
The saga of the stuck mainsail car continued today, with dire consequences. We had sailed during the night without the head of the main attached to the mast, as the stuck car prevented us from taking a reef if we needed to. Nandor and I devised a plan to dissasemble the car by taking out the locking mechanism and changing the halyard attachment point to make the sail easier to use without the support of the lock. He had seen how much fun I had had the last four times I had climbed the mast so was keen on doing the job himself.
I hoisted him up the mast, having declined my helmet, but using my idea of a carabiner to clip himself to a tensioned halyard to prevent himself from swinging away from the mast. He was able to pull apart the slider car and it finally became dislodged after several hammer blows. Next I hoisted and lowered him to various points in order to change the halyard from a direct hoist to a 2:1. He was having a hard time of it as the waves left over from the stronger winds we’ve been having these last few days made the boat slam horribly. Finally, I saw him be wrenched free of his grip and swing away from the mast several times, coming back with a bang each time.  He had disconnected the carabiner, making the amplitude of his swings greater and resulting impacts harder. Its horrifying standing on deck watching him swung around as I was powerless to help and could only listen to his cries of frustration and grunts of pain. 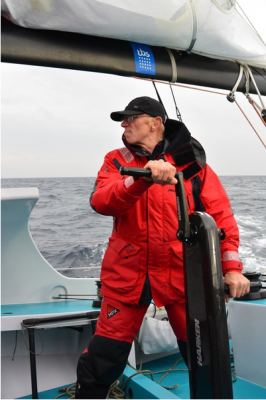 Finally, he finished the final part of the job and called to be let down. Drops of blood spattered down before he touched the deck and when he was down I was shocked by what I saw. He blue eyes, pinched with pain, stared out at me from a face that was completely red with blood!! He lifted up his hat to reveal a deep impact wound on the upper forehead that was steadily dribbling blood. I took him back to the cockpit, we washed his face and then washed the wound in betadine before I closed it closed with four stitches. Thanks to the medical training we received from the BWR organisers, and my years as a sailmaker, he’ll have a neat scar for the future. I think I’ll swear off tomato sauce for a while however!
While Nandor recovered his wits and took a tally of his bruises, I prepared patches for the mainsail. Only, when I tried to drop the main I found that it was stuck again! I climbed the mast again and fought to release it but without success. As such, I cut it free again and we’re back to square one. We have talked about options and have decided to head to Invercargill, in New-Zeland for a 24h pit stop. Stay tuned!