The new all-carbon maxi Rambler 88 was launched the month at New England Boatworks in Rhode Island and her owner, George David, will make the RORC Caribbean 600 and Les Voiles de Saint Barth his first big regattas of 2015. 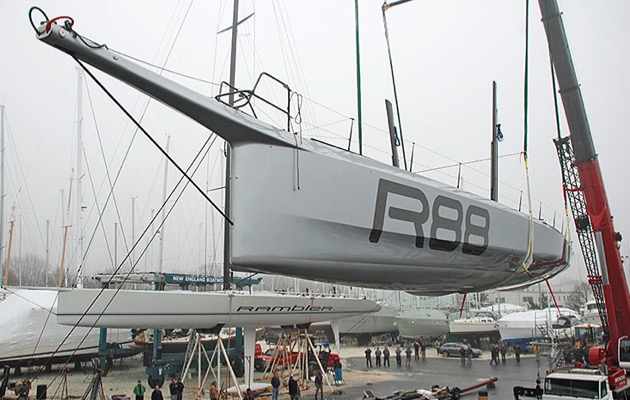 The new 88-footer, designed by Juan Kouyoumdjian, replaces David’s previous yachts, Rambler 90 and 100, both of which won numerous regattas, including the Caribbean 600 in 2011, the Newport to Bermuda Race in 2012, and and the Block Island Race in 2011 and 2013.
Famously Rambler 100 capsized in the 2011 Fastnet Race after losing her keel. (The salvaged boat was rebuilt and is competing in the 2014 Sydney Hobart Race as Perpetual Loyal.)
The new Rambler is what David terms ‘the little boat’, some way short of the 100-footers that are about to do battle in the Rolex Sydney Hobart Race, such as Jim Clark’s Comanche and Bob Oatley’s Wild Oats XI. Indeed, you could say that it’s a slightly odd length, midway between the super maxis and bigger than the vigorous group of 72ft Mini Maxis, so therefore designed primarily for handicap racing.
The yacht has a canting keel, long daggerboards and a deep chine, not unlike the latest generations of IMOCA 60s. But then the designer, Juan K (as he is best known), is renowned for the last, super-powerful generation of IMOCA 60s such as Pindar and Hugo Boss – often argued as too powerful for solo racing – and for Volvo Ocean Race winner ABN AMRO.
Owner George David says: “We’re targeting the Transatlantic Race 2015, but the RORC Caribbean 600 and Les Voiles de Saint Barth are right up there.
“Les Voiles de Saint Barth is a great venue and event. It starts with St Barth and all that means, plus typically solid sailing breezes that bend around the island and have their gusts and lulls. This is a regatta where you need to get in front and stay in front; it rewards those who can sail where they want.”
David and his crew are regulars at Les Voiles de Saint Barth, where they have won three of their four outings in the race.