A new 400-berth marina in East Cowes is planned 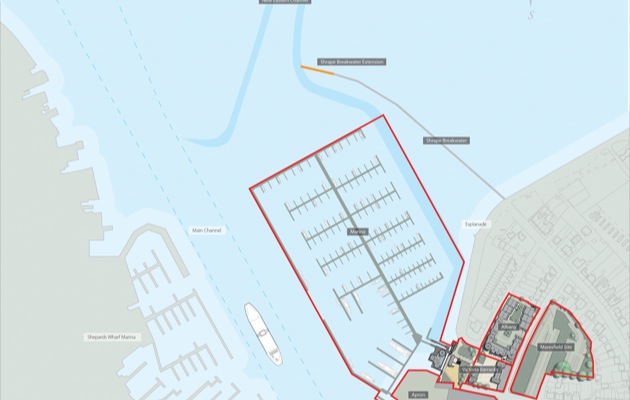 A planned new marina in Cowes is one step closer with the construction of the new breakwater off the entrance to the harbour and the announcement of the developers.
The Cowes Outer Harbour Project, a long-standing strategic partnership between Cowes Harbour Commissioners and the Homes and Communities Agency was always envisaged as acting as a catalyst for new investment, including the 400-brth Victoria Marina development in East Cowes and it is hoped it will create several hundred new jobs as well as improved facilities for yachtsmen.
The Homes and Communities Agency has today announced that Camper & Nicholsons and Westcourt Real Estate are to be the developers for Victoria Marina development. The scheme will include the regeneration of 2.6 hectares of brownfield land in East Cowes and facilitate the creation of over 250 job opportunities.
The development plan also includes 100 properties, restaurants and a hotel.
Captain Stuart McIntosh, Cowes Harbourmaster, said: “This marina development will also assist with the additional funding required to enable harbour commissioners to complete the harbour protection programme. The final stages of harbour infrastructure involve the construction of the Shrape breakwater extension and improved harbour access and navigational safety by the dredging of the new Eastern Channel.”
The decision on the developers for the Victoria Marina and associated redevelopment at East Cowes follows a recent announcement by the Solent Gateways partners for a project that encompasses new concept plans for East Cowes and a £15m investment for improving cross-Solent connections between Southampton and the Isle of Wight.Above is the plan for the layout of the new marina.