ARC 2014: A new course record and an impressive repeat performance, Matthew Sheahan reports from the

There are easier ways to cross the Atlantic than peeling kites on an hourly basis, gybing on every lift and sitting on the weather rail whenever it might make a difference. 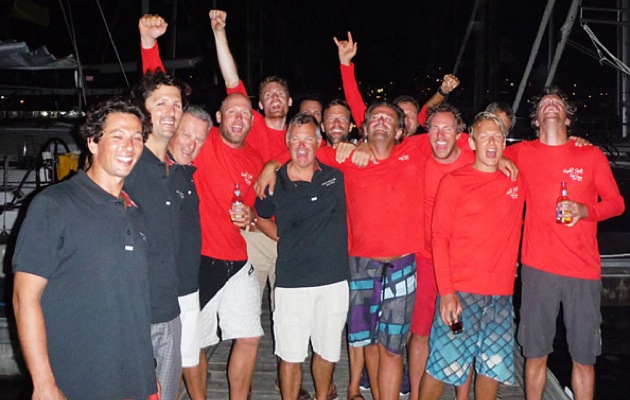 But if you’re chasing a place on the podium in the racing class of the ARC 2014 and keen to add to a string of former successes, then these are the actions that will improve your chances. At least this was the view of Scarlet Oyster’s owner/skipper Ross Applebey and his crew.
Having won the racing division overall in 2011 and their class for the last three years in a row there was every reason to keep pushing to see if they could add another victory to their already impressive tally.
Setting goals this high, in what has become an increasingly competitive event, is to nudge the bar up once again. To attempt it in a 27 year old cruiser/racer is particularly impressive.
But as Appelbey and Co crossed the finish line here in St Lucia at 2040pm local on Monday night they not only took a class win, but took first overall in the racing division once again. But it had been close. The 100ft LOA supermaxi Leopard had taken line honours and smashed the course record by slicing two days 6 hours 45 minutes and 19 seconds off the previous best time. Yet on corrected time the unofficial reckoning had Scarlet Oyster beating Leopard by 22 minutes.
To quote Appelbey or his crew during an afternoon of celebrations ashore as they tucked into multiple rounds of well earned refreshments would be unfair, but it was clear to see how excited they were at both winning again and beating Leopard.
But the win hadn’t been easy, particularly during the last two days when they had calculated what time they needed to finish at to take the top slot. Apparently the mood on board swung wildly between nervous excitement and despair with each gust and wind hole that they passed through. During the last two hours no one spoke apart from Applebey to call ‘trip’ during a gybe.
It wasn’t just Leopard that they were racing either. Captain Blind, a French registered Grand Solei 43 owned by Yannick Richomme had fought with Scarlet Oyster for more than 1,000miles during the crossing. By the finish they were less than two hours behind.
Scarlet’s achievement is all the more impressive given the crisis they were facing 24 hours before the start.
Having lost their rudder during the Middle Sea Race in September, (you have to read the account in the Feb 15 issue of YW that earned the skipper and his co-skipper the RORC’s Outstanding Seamanship Award) and then building a replacement in a back street fabrication shed on a remote island, Scarlet Oyster then set off on a 2,000 mile delivery trip to the start of the ARC in Las Palmas. Having arrived in good time and with a new rudder manufactured in Denmark and on its way, the airline responsible for the shipping lost the package in Madrid and only finally delivered it 24 hours before the start of the race.
How Applebey didn’t blow a fuse is still the subject of much debate.
Shortly after Scarlet Oyster crossed the line there was a flurry of other finishers in the racing division that crossed the line overnight. Each had their own story to tell of the intensity of the racing over the last two weeks, the torrential rain, the lightening and the trading of food and beverage stocks against certain unpleasant yet necessary tasks.
The next few days will see a flood of finishers in the cruising divisions along with more tales of how, why and where their courses took them.