Dutch luxury yacht builder Heesen has delivered the 50-meter superyacht "Monaco Wolf" to her owner. She was delivered in early June to the obvious delight of her owner. She endured a solid sea trial regime and passed with satisfactory results. Owner’s Representative Howard Lowe from Royale Oceanic commented: “During the first day of sea trials we had the chance to test the vessel in moderate weather conditions with wind force 3 / 4 and waves around 1 meter. We met all requirements and the yacht performed well. M/Y Monaco Wolf is now ready to be extensively used and enjoyed during the summer season in the Med.”

Monaco Wolf has been designed by the well-known Omega Architects. One of the special features on the exterior is reverse sheer ‘pelican beak’ bow. On the interior, the design is by Italian designer Francesco Paszkowski who creates sumptuous design concepts. She was built under the name 'Azuro' YN16650 and boasts a six cabin layout allowing up to twelve guests. MTU 16V 4000 M73Ls are onboard powering Monaco Wolf and 23-knots is her top speed. A range of just over 3,000 nautical miles can be had when she is dialed back to conservative speeds over time. Monaco Wolf, was slated for delivery at the very end of May, and was handed over June 2nd 2014. 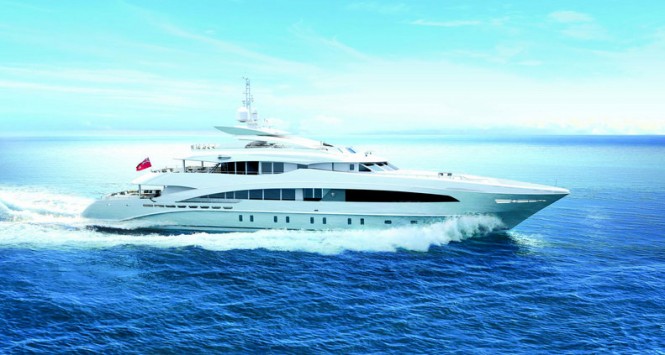